As regards surface, Danska Fall is a large nature reserve. Visitors come here in both winter and summer. They are particularly attracted by the waterfall itself, its beautiful surroundings and historic associations.

There is a 36-metre drop from the top of the falls to the river’s mouth. The river has several rapids and beautiful waterfalls. A walking trail passes through the scenic beech forest. The nature reserve is also crossed by the Halland trail. If you take the trail from the car park out to the waterfall, there are several benches and picnic tables where you can rest your legs and enjoy the contents of the basket you so wisely brought along!

Download a map of the Danska Fall walking trail

Beautiful beech forests and many lakes

Beech forests with some oaks dominate the nature reserve. Pine bog, mixed forest, wetland forest, lakes, watercourses and open land (e.g. at the Eriksköp farm estate) complete the picture. The beech and oak forest type is over 100 years old and, thanks to their age, its trees are becoming interesting as hosts for lichens and mosses. There is water on three sides of the nature reserve, the Brearedssjön lake on the north , the Assman watercourse on the east and the Skällåsasjön lake on the west. 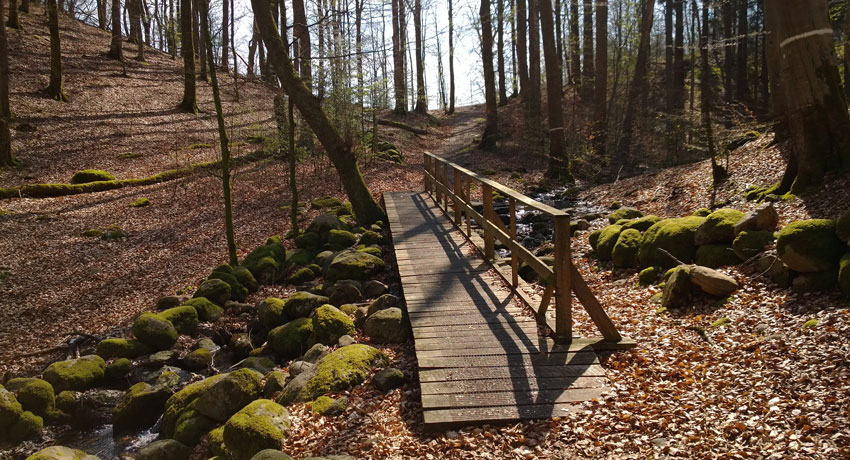 The Danes fell in

The name Danska Fall (Danish fall) comes from an old tale regarding the Battle of Fyllebro, 1676. Part of the Danish army is said to have fled upwards along the Fylleån river and, with the Swedes hot on its heels, sought shelter in the forest around the falls. As the fleeing Danes were running across a suspension bridge, the Swedes cut the ropes. The bridge and the Danes fell into the water. In the middle of the river is a large stone which, so the tale goes, is called the king stone in honour of the then Swedish king, Karl XI.

On an island in the lower reaches of the Assman, where there now grows lush ash forest, the Jöransfors iron works was set up in 1727. Several buildings were erected and privileges were granted for the manufacture of nails, tools and other wrought iron goods. Running the works required water power, wood for charcoal burning, transport routes and investment capital. The water power was provided by the Assman’s rushing rapids and there was plenty of wood in the surrounding beech forests. Jöransfors iron works closed down in 1749 and only a few traces of it can now be found. In 1728, a tannery for preparing leather and hides was built next to the iron works. It operated for some ten years.