Every place in the world has something unique. Of course, Halmstad has its own particular gems too. We would like to tell you something about some of our sights that are a little out of the ordinary. That make us proud and happy... And which we love sharing. A shared joy is a double joy! 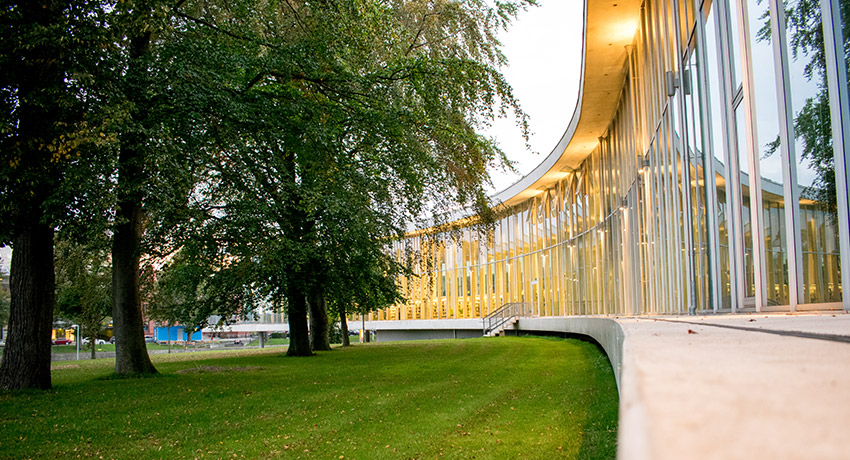 Halmstad city library was inaugurated in 2006. In the same year, it was awarded Halmstad Building Committee’s architecture prize. Thanks to the city library’s exhilarating design and beautiful location in the city centre by the Nissan river, a visit there is an experience in itself. The building’s shape is entirely unique. Placing a piece of paper on the ground, the architects traced out this shape guided by the trees that still stand here. Halmstad Art Gallery and its thrilling exhibitions are also here.

The “large sand hill”, as Lynga is also known, rises a full 36 m above sea level. At the top, there is a far-reaching, magical view across the sea, Haverdal nature reserve and its surroundings. With its knotted tree trunks forming mystical shapes, the coastal forest is an extraordinary experience. Here, you can roam a hotchpotch of paths and enjoy nature’s artistry. By the car park, there is also a corridor of fossil sand dunes in the pine forest. These dunes started to take shape 400 years ago. Over 80 years ago a blonde-headed being who came to be known as recruit 91 Karlsson was created. His progenitor was cartoonist Rudolf Petersson of Halmstad. It was while he was doing his service in regiment I16 from 1916 to 1918 that the cartoon figure was created.

The recruit’s number, 91, is derived from I16. Turning this upside down gives 91! The series was first published in 1932 and became very popular.

At the garrison and air-defence museum, you can see hundreds of original drawings as more of our history comes to life. Since 1993, recruit 91 has also stood sentry on Storgatan in Halmstad. You will find him next to Norre Port. Blondie, recruit 91, Karlsson comics are still being published today. 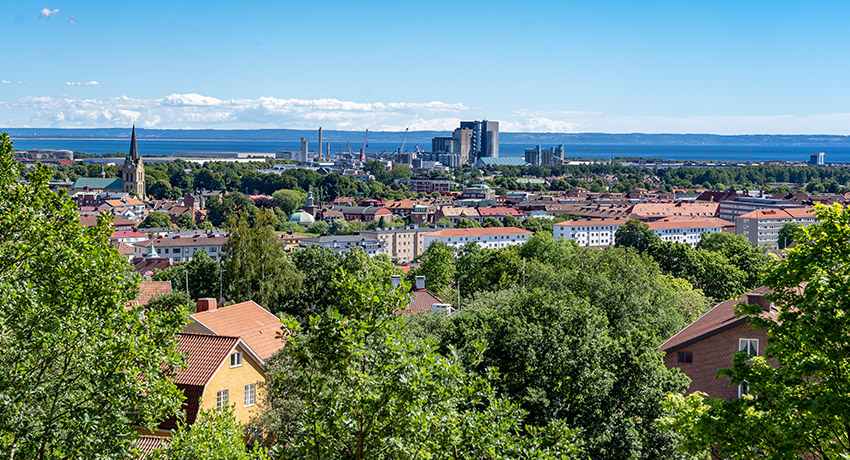 4. Galgberget – A lookout point and gallows…

The Galgberget hill peers down over Halmstad. It is a central and extremely beautiful rural area that has both a light and a dark history. In the 17th century, Galgberget was a place of execution, a gallows hill that was much used. Thankfully, there are no traces of this. However, who knows? Perhaps there is still the odd spook wandering around the trees... Galgberget is loved and well-visited by Halmstad residents and people who are staying in the city. On a clear day, you can see not only the whole of Halmstad, but also the Bjärehalvön peninsula in Skåne. The Hallandsgården local heritage park is here too. Galgberget is particularly magical in spring. Is there anything more beautiful than the delicate greens of beech forests? 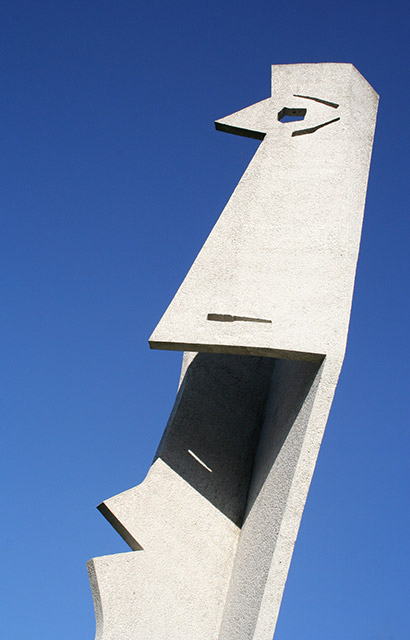 5. Picasso’s Head of a Woman – An artistic masterpiece

Pablo Picasso was one of the 20th century’s most influential and pioneering artists. Halmstad has one of sixteen unique sculptures that he donated to cities around the world. His Head of a Woman in our Picasso park is 15 metres high and sculpted in shot-blasted concrete. The shape stems from a period when Picasso was experimenting with tearing paper to create silhouettes. Jacqueline Roche, Picasso’s last wife, was the model for the sculpture.

6. Linehed park – A repository of the world's trees

Of course, not all the world’s trees are here. However, the park does have over eighty tree species from all around the globe. The area is divided into three circuits – the Asia circuit, the Europe circuit and the America circuit. So that you can learn more about the various species, a tree guide can be downloaded. Along the circuits, there are informative notices. To provide more information, many of the trees are included in an audio loop.

Whether you come with a wheeled walking frame, wheelchair or pram, getting around the walks is easy. As also is becoming a true tree hugger!

A work by Stellan Mörner, member of the Halmstad Group

The Halmstad Group of artists comprised Sven Jonson, Waldemar Lorentzon, Stellan Mörner, Axel Olson, Erik Olson and Esaias Thorén. It was formed in 1929. With Halmstad as the common base, these artistically visionary friends remained together throughout their lives.

In the 1920s, the Halmstad Group’s members were cubists. At the start of the 1930s they introduced surrealism to Sweden. By 1934, the group had become devoted surrealists with links to continental surrealism. Halland’s coastal landscape was their constant source of inspiration. Mjellby Art Museum has a large, permanent collection of the Halmstad Group’s work. This makes it possible to continuously hold varying exhibitions of the group’s pioneering contributions to Swedish art history. 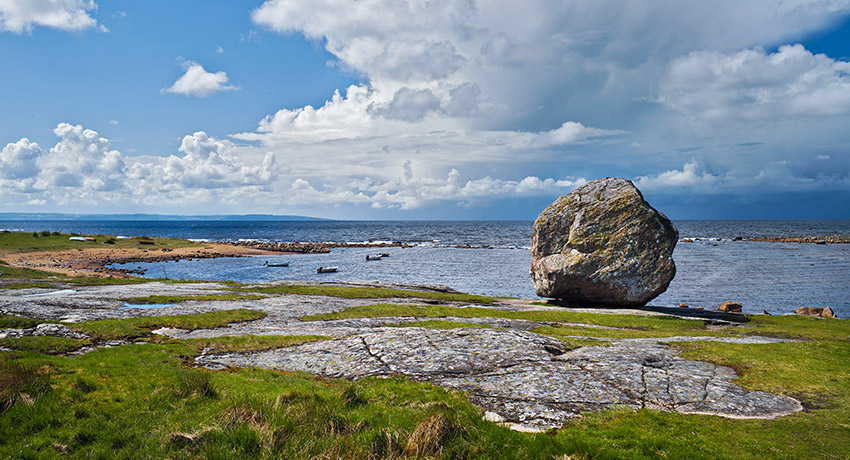 In the WWF’s “Swedish Pearls” campaign, Trönninge beach – Laxvik/Påarp was chosen as a naturally beautiful area that needed to be protected in Sweden. Påarp’s ancient burial site (2.5 km southwest of Trönninge) is Halland’s largest. It is next to the Laholmsbukten bay near Gullbranna.

Sänke Hög is the largest of the stone mounds. It is 30 metres in diameter and two metres high. The coastal meadows here are rich in birdlife. In the autumn, Skäret island provides staging points for, amongst others, many wading birds. Just north of the burial site, there is the “Slynge boulder”, a 3.5-metre high glacial erratic and an impressive landmark that reminds us of our Ice Age past. Southwest of the burial site, there is an artesian well.

Along the popular Prince Bertil’s trail, the picturesque, small-boat marina of Grötvik nestles in beautiful surroundings. Even today, you can see traces of the stone quarrying that was carried out here in the middle of the 19th century. This was one of Sweden’s largest stone quarries. Its beautiful Södrum stone can be found all around the world. Examples include the Peace Palace in Den Haag and the Swedish churches in Copenhagen and Paris.

Jansa quay owes its existence to Gustav Jansson, manager of the Grötvik stone quarry. He started quarrying stone on his own land in 1899 and began constructing a pier for shipping the results of his labours. Construction was stopped most probably because of the shallowness of the water. In 1972, concrete was poured to turn the pier into a bathing jetty.

When the area was under Danish rule, Halmstad was a very important outpost facing neighbouring Sweden. Danish King Christian IV reinforced Halmstad’s fortifications at the start of the 17th century. Four city gates were built, the north one being completed in 1601. All the city’s gates were closed at the fall of darkness.

When Halland became Swedish, the fortifications began to crumble and most of them were levelled to the ground. Nonetheless, historic traces are still visible today. The proud north gate (Norre Port) still stands guard against any attack from the Galgberg direction. Linking Norre Port to Halmstad Castle, Storgatan was the street where people liked to walk and be noticed in the 17th century. In addition to the residences of Johan Twist and Kirsten Munck, a mansion in the Vattenporten district also still remains. If you blink, perhaps images of how Halmstad people lived over 400 years ago will surface in your mind! 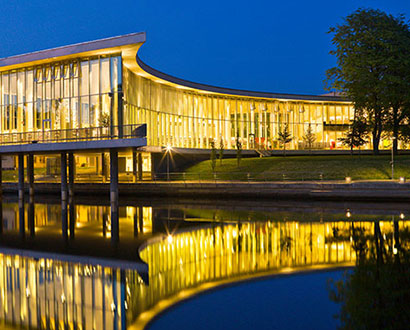 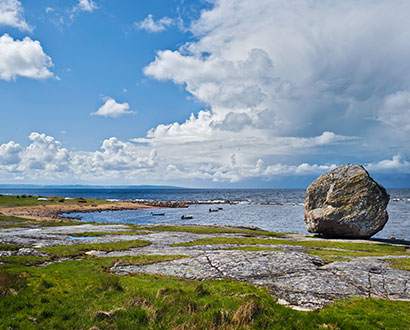 Share
The page was last updated: 20 May 2021 Top image photographer: Patrik Leonardsson
Send us your comments