There used to be fortifications all around the heart of Halmstad. Some remnants of the historic walls can still be seen today.

To show the location of the fortifications in relation to today’s Halmstad, the sketch superimposes the walls and moat on a 2019 map of the city. 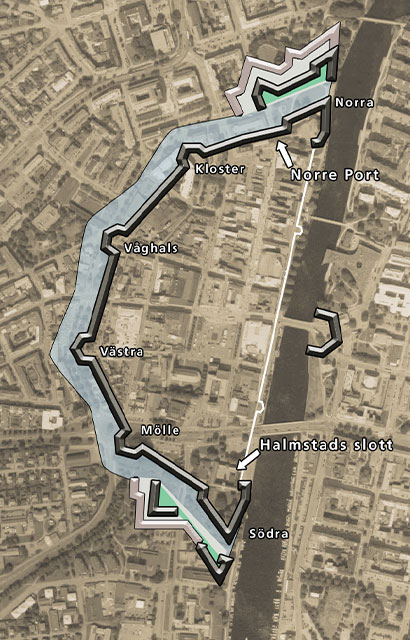 Building of the fortifications begun

The fortifications comprised high earth embankments surrounded by stone walls. Known as bastions, the pointed projections were platforms for the fortifications’ artillery. These bastions had their own names – Norra (northern), Kloster (monastery), Våghals (daredevil), Västra (western), Mölle (mill) and Södra (southern). A moat and the Nissan river ran around the fortifications.

On the north and northwestern sides of the fortifications, there were two high earthworks for long-range artillery. These were known as “katter” (“cats”). It is believed they were built from earth removed in constructing the moat.

Even today, you can see the “west cat” at the junction of two central streets (Byggaregatan and Hantverksgatan). The north gate and parts of the “north cat” can still be seen at Norre Katts park.
Also still visible are the old casemates (inset gun emplacements) along Karl XI:s väg. At Klammerdammsgatan, there is an open casemate and at Kyrkogatan there is one that can be viewed from the outside.

Share
The page was last updated: 30 June 2021
Send us your comments